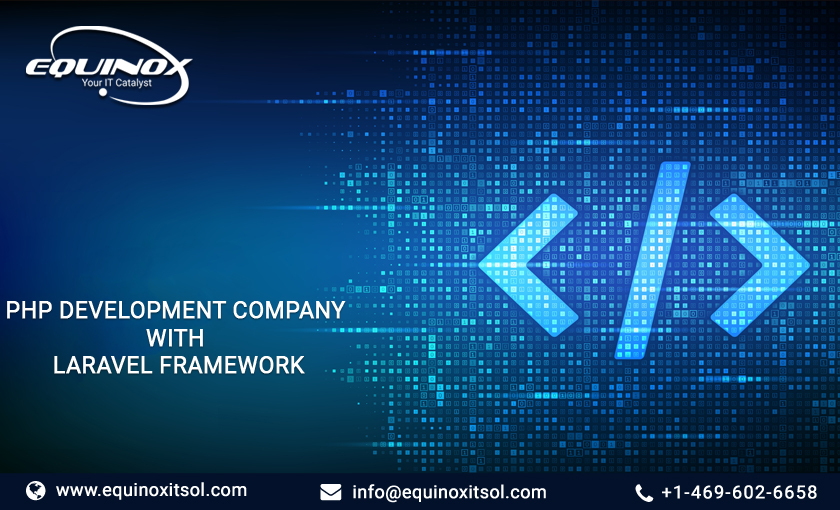 You have heard of PHP development earlier, but did you get time to find out more about PHP and Laravel Frameworks work together?

In this blog post, we’ll find out more about that and how it works out to the benefit of PHP development.

While PHP has come a long way in its success, Laravel has gained recognition and reputation as the most recent and actively used Framework in use.

While PHP has come a long way in its success, Laravel has gained recognition and reputation as the most recent and actively used Framework in use.

You may ask now –  how to choose an accurate framework for your application and how can you know which one suits your project. Some of the key factors to consider are-  the costs associated with the development, team skills and their experience, the popularity of the Framework and there are several other factors like third-party integrations, deployment, testing and many other.  The PHP scripting language has many frameworks with strong technical capabilities that include – Laravel, Symfony, Codeigniter, Yii 2, PhalconCakePHP, Zend, Slim. Among these, Laravel is leading the position of top list among PHP MBC frameworks.

So now that we have understood Laravel has hit the top position in PHP development services, let’s find out how it works and the benefits associated with it.

Having rated with 45000 starts on GitHub, Laravel can be defined as – an Open Source PHP Web Framework developed and maintained by Taylor Otwell, this has emerged as more advanced selective for the Codeigniter framework. In fact, its most of architectural pattern is based on Symfony.

Having gained excellent recognition after the release of version 3, which carried the features like – Commandline Interface called Artisan,  Support for the Database system and migrations. It also introduced a packaging system called as bundles.

One of the most common hurdle one comes across is to manage too many questions in architecture design of application.  These questions include – which component should I begin to work first? What are the third-party dependencies and libraries should I install first?  What sort of library? How to manage the dependency injection model etc..

Though these questions may appear as complicated, as you begin to work with Model, View, Controller, seamless interaction makes it much more easier. Therefore, save time and energy with additional functions available.

This way working with the framework becomes much more appealing and profitable.

Choosing PHP development services with the Laravel Framework gives your business less risk and makes the process of implementation of authentication techniques much simple. Not only the configuration becomes simple, but also there is a simple way to organize authorization logic and control access to other resources.

Object-Oriented Libraries have many pre-installed Object Oriented libraries which are not found elsewhere in another Framework.  One of them is Authentication library with many advanced features.

Artisan is a new build in a tool that a developer usually interacts with Laravel Framework using Commandline.  This tool allows the developers to perform the majority of specific, repetitive and tedious programming tasks that get performed manually.

Laravel has strong security security within its framework. However, the password would never gets saved as the plain text in the database and it uses Bcrypt hashing algorithm for generating an encrypted representation of a password. Further Laravel.uses prepared SQL statements which make injection attacks more effective while providing a simple way to escape user input to avoid user injection of <script> tag.

Great Tutorials – Laravel brings a benefit of Laracasts which features a mix of free and paid video tutorials that show you how to use Laravel.

Blade Templating Engine of Laravel is very helpful to work with the PHP/HTML Sphagetti much better that is one of the best features of the framework.

Responsible interface is a class which is used to implement the interface which can be returned by using the controller method.

Automatic Package Discovery is yet another new feature available in Laravel 5.5 that detects the packages automatically which users want to install.

While there is much more detailed description to discuss about the each additional features of PHP vs Laravel, it can now be stated that there is lot of flexibility,  consistency, user authentication, easy notification of emails, testing automation, elegant dependency injection, separation of business logic and presentation code, eloquent ORM, ques and scheduler and clean and simple routing. These additional highlights have added to the benefits of Laravel and it continues to win over the appreciation of PHP web development company. Further the benefit of PHP development services has brought positive and profitable impact on your business website. If you really plan to.take your business to the next level, it has to be PHP with Laravel and it certainly exceeds your expectations. The entire function is aimed at making the PHP development much more effective with the framework and in this process,  there is no other than Laravel to help achieve this. Documentation may appear as a problem initially . But with the help of API documentation which lists each and every class method declared in Laravel framework, it gets better.